From the Edwardsville Intelligencer, Sept 8, 1928

Big Chicken Dinner at 60 cents, Street Dance and Band Concert are some of the events arranged for Community Road Observance.

Opening of the Edwardsville-Bunker Hill Road will be celebrated on Wednesday afternoon and evening, October 3, it was announced today after a conference of an Edwardsville committee with several residents of Bunker Hill last night.  Those from Bunker Hill came here to learn what Edwardsville is doing to make arrangements at Bunker Hill complete.

In announcing several committees this morning to work out the details in Edwardsville, S.D. Wheeler, President of the Chamber of Commerce predicted that 500 will go to Bunker Hill that day.  He believed a majority will partake of a chicken dinner.

Residents of Bunker Hill and farmers along the road will donate chicken and other food for the big chicken dinner, making it possible for the ladies to serve at 60 cents a plate.  Funds realized from the dinner will be used to promote civic affairs at Bunker Hill.

Residents of Gillespie, Dorchester, Benld, and Sawyerville will be invited to the gathering.  The road between Bunker Hill and Gillespie will be finished in another few weeks.  The new pavement along the Springfield road extends from Edwardsville to a point near Gillespie with connection at each end with Route 4.

Mrs. F.H. Postlewaite, President of the Bunker Hill Civic League was one in the delegation here last night.  She is an enthusiastic worker for the gathering and will have charge of the dinner.

During her remarks last night, she said Bunker Hill will endeavor to promote ample entertainment for the afternoon and evening.  Beside the chicken dinner that will be ready during the afternoon, sandwiches and other refreshments will be served until well into the night.  A street dance will be arranged for the evening.  The platform will be guilt on the pavement.

Edwardsville will have a part in providing entertainment.  The Edwardsville Municipal Band of 34 pieces will be taken to Bunker Hill.  Business manager Frank Fink told the meeting last night that the musicians will begin making arrangements shortly. 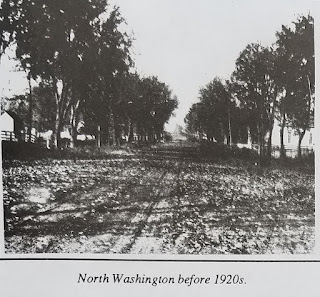 Pictured: North Washington Street before the 1920's prior to the Hard Road