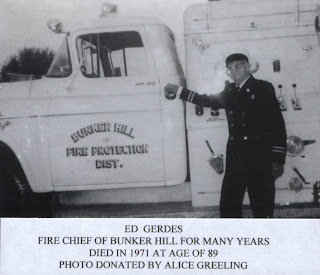 Reprinted from the Gazette-News, January 8, 1970

Chief Gerdes joined the fire department in 1928, and became chief in 1939.  He was chief when the present fire protection district was formed in 1950.

He is chief of one of the largest fire districts in the state, with boundaries in two counties, from Prairietown and Dorsey on the south to near Wilsonville, Dorchester, and Plainview on the north, and near Brighton on the west.  There are more than 800 farms in the district, as well as communities of Dorsey, Prairietown, and Shipman, each of which has its own fire company with a pumper and firehouse.  The Bunker Hill Company has two pumpers and an emergency truck. 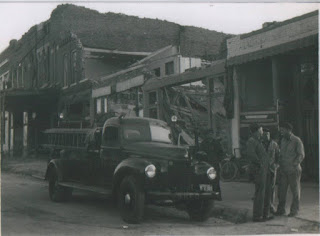 Naturally, he has many memories of fires in the past.  Some are tragic while some incidents were humorous.  He recalls the time the old Reo truck caught fire.  It was at the farm of Jake Mamie.  Jim Jencks was chief then and had the fire truck close to the burning house to pump from a well or cistern.  The wind shifted and the fire was too close.  The hose had to be cut to get the truck away from the building.  Before that was accomplished, the seat had caught fire.

Gerdes was born and reared in St. Louis.  He came to Bunker Hill at the age of 18.  He went to work on the farm of his uncle, George Gerdes until he was 21.  Then he started working at other places.  At the condensery, the Bunker Hill coal mine for 17 years, then worked at the water works for 13 years.  He worked at the Ford garage and also did carpentry and electrical work. 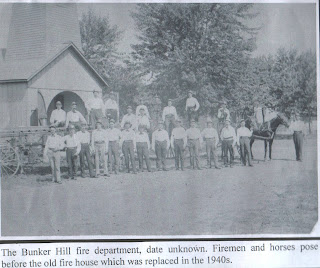 Pictured: The Bunker Hill Fire Department (date unknown).  Firement andn horses pose before the old firehouse which was replaced in the 1940's

The task that he has been doing since the flagpole was built uptown, and continues to do (except when the Christmas lights are up) is to raise the flag each morning and lower it each evening.  He is the only one who performs this task, except when he is ill.

Behind Ed Gerdes is his wife of 64 years, the former Elizabeth Sneeringer, to whom he was married January 26, 1916 at St. Mary's parsonage.  They moved to Bunker Hill two years after their marriage and have resided on West Warren Street since 1918.