History of the Bunker Hill Gazette 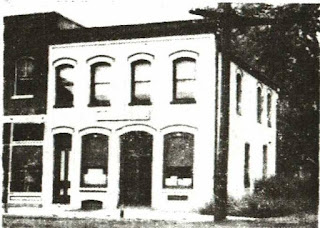 Pictured: Bunker Hill Gazette-News on NW corner of E. Warren and N. Pine St.
Was the former Chas. Folkerts Grocery Store
The press and type of the STAUNTON BANNER were purchased by A.W. Edwards, and in November of 1860 the first number of the Gillespie UNION AND GAZETTE  made its appearance.  The paper continued under Mr. Edwards control until 1863, when he enlisted in the Union Army where he remained until the close of the war.  The publication was, however, continued for some time afterwards by Alonzo James, but he too enlisted and the publication was then suspended.  The UNION AND GAZETTE was extremely Democratic in tone.
The BUNKER HILL JOURNAL was the name of the first paper published in Bunker Hill.  E.J. Bronson was the editor and proprietor.  It was a five-column folio and was neutral in politics.  The first number was issued December 8, 1859 and the last in May 1860.
In 1865, after the return of Mr. Edwards from the war, her removed the printing office from Gillespie to Bunker Hill and resumed the publication of the UNION AND GAZETTE.
The first number was issued January 19, 1866.  He continued the publication until January 31, 1867 when he sold out to Dr. S.R. Sawyer and F.Y. Hedley.  The paper was then Republican in politics.  When Messers Sawyer and Hedley assumed control, they changed the tone and made it independent and it so remained until Dr. Sawyer's death, which event occurred on May 24, 1868.  After that date, it again became Republican in politics and has remained the organ of the Republican party of Bunker Hill to the present time.  In 1871, the name of the paper changed.  The work [Sic] "UNION" was dropped out and from that date to the present it is known as the BUNKER HILL GAZETTE.
Mr. Hedley continued as editor and proprietor until January 1, 1878 when Mr. W.S. Silence became the publisher, Mr. Hedley still acting as editor.  This arrangement continued until January 24, 1879 when both Hedley and Silence retired and the office was leased to Messers Said and Poorman of Charleston, IL, who published the paper until July 1879.  The circulation of the GAZETTE is about 750.  It is a neat, sprightly paper and enjoyed the confidence of its constituency.  Mr. Headly, who may be regarded as the father of journalism in Bunker Hill, has retired from the active participation of the business but not without first demonstrating his entire capability to run a newspaper successfully.  He is a practical printer, and the GAZETTE, under his management, was a model of typographical neatness.  He is a good writer.  He is now postmaster of this beautiful little city, and as a man and officer, is respected by all who knew him  Mr. Headley resumed editorial charge of the GAZETTE  about the 10th of July, 1879.
The paper became the GAZETTE-NEWS in 1905 under the association of Philip C. Hansen and W.B. Powell.  At this time, two competing newspapers were combined, the BUNKER HILL NEWS  and the GAZETTE.  Other names of leadership through the years included Harold Gerlach, Arthur and Frieda Strang, and Lawrence Gosch.
In 1964, the paper was published by Carl Stanton, who remained publisher/editor until 1987, at which time it was sold to John Galer, a Hillsboro, Illinois publisher. 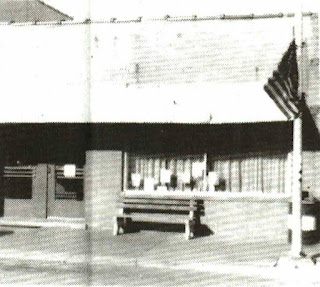 From the Bunker Hill Gazette-News October 1950

The J.H.L. Fahrenkrog building on Warren Street has been purchased by the local library board at a cost of $1,500 and will house the Bunker Hill Library.  (Today, the City of Bunker Hill owns the building which housed the Bunker Hill Historical Society and Museum.

The Bunker Hill City Library will open for public use Saturday evening, October 7.  The opening will be held although there are some minor details both inside and out of the building yet to be finished.

The new library is located on East Warren Street and occupies the site of the library and contents that were destroyed in the March 1948 tornado.  Although the building had been completed for some time, opening has been delayed because of the limited budget on which the board has to work.

Much of the equipment has been donated.  Two desks were given by Dr. and Mrs. George Hess and one each by Mr. and Mrs. W.E. Haxel and Mr. and Mrs. R.E. Rigg.  Some steel cabinet and six chairs have been purchased by the board.  It is pointed out that more chairs are needed and if anyone has some spares they would be gladly accepted for use at the library.

Some 300 books have also been donated to start off the new library.  Mr. and Mrs. F.A. Wende of Winnetka, IL have given 195 books and others have been given by Mrs. B. Deffenbaugh of St. Louis, MO., and Mrs. Bella Zimmerman of Beloit, WI., who donated a book in memory of her son.

Mrs. Theo Stone of St. Louis has donated a number of books which she collected there from members of the book club.

As books come into the library, they are catalogued [sic] by a library committee of which Mrs. O.C. Weidner is chairman.  This committee has received the help of several interested citizens in their work.

For the opening, six cases of books from the State Library will be on hand.  These are made available on a loan basis.  By receiving books from the state, much good reading is provided for both children and adults.  Miss Loretta Bartels will continues as librarian as she has done for many years in the past.

The new library building is a modern fireproof structure, with buff brick front.  The interior has been finished in a light green plaster and it is heated with an oil furnace.  Ralph Moxey installed the heating plant free of charge.

Members of the library board, of which R.E. Rigg is chairman, are Lee Sutton, Walter Heal, Goebel Ladd, max Bertagnolli, Clara Mason, Cora Fensterman, Mr. O.C. Weidner, and Mrs. L.O. Schreier, who is secretary.  Board Committees will be working at the library Thursday and Friday getting ready for opening on Saturday.  At the opening, a free souvenir book markers will be passed out to all who attend. 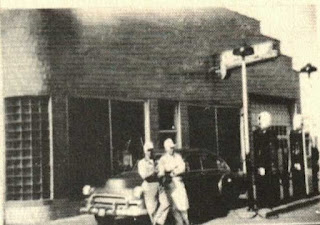 Pictured: Bruckerts on NW Corner of N. Washington and W. Fayette St. in 1950

From the Gazette-News March 20, 1952
Each day, some 200 children living outside the City of Bunker Hill are brought to school in four buses.  The mileage they cover on their on their trips averages 230 miles daily.  In a few cases, students drive their own cars to school.
Ed Bruckert's Garage furnished transportation for the school district, being under contract and receiving payment on the mileage basis.  Bruckert assumes full responsibility for the buses, which he owns, doing his own maintenance and providing drivers for each.  In addition to being a regular driver himself, Bruckert employs the following men, Chester Kehr, Charlie Forrler, and Chester Scroggins.  Alfred Snedeker is an alternate driver.
Prior to 1948, the school maintained their own transportation, owning their bus and employed drivers for the daily trips.  The system proved to be hard to manage properly and was costly in upkeep because of such.  The arrangement with Bruckert was instituted in the fall of 1948 and has been efficient and has provided better service.
In order to facilitate orderly conduct and loading of buses, at the end of the day, classes are dismissed after short intervals to avoid pushing and a big rush which would be likely if they were all turned loose at once.
...Read more about this and other Bunker Hill, IL historical stories at https://bunkerhillhistory.org/
--Cite this story: The Bunker Hill IL Historical Society. "A Look Back in Bunker Hill History." Bunker Hill Gazette-News, March 10, 2022.
Posted by Carlos Arzuagas (W9FE) at 10:44 AM No comments:

Roger S. Mercer is holding a formal opening of his newly built confectionery on Saturday.  The new business, located between the C.M. Miller Card Co., and "Tickles" Barber Shop, is a fine addition to the business section of town.

The confectionery is 18 x 50 feet in size and is of concrete block construction.  It has a perma-stone front, done up in brown and white, and is pleasing to the eye.  Another building, east of the confectionery, purchased by Mercer from C.M. Miller, has also been given a perma-stone front.  Equally attractive is the interior of the new building, which has been finished entirely in natural color knotty pine.  All new fixtures have been installed.  These include a large fountain, counter and stools, booths with red and green plastic coverings and a showcase and coolers necessary for the operation of such a business.

Full kitchen facilities are provided behind a partition toward the rear of the building.  In addition offering smokes, soda, candy and a fountain service, a complete line of sandwiches will also be offered patrons.

In a statement on his opening Mercer said that it isn't going to be as formal as you might expect in that he has already been pouring coffee and dishing up ice cream for about a week.  Saturday will be the first day the full facilities of the store will be put into operation and he says it will be  "just come as you are".

Mercer formally operated a similar business across the street from his present location on East Warren Street and without a doubt many of his friends are glad to see him back at his old work.  This newspaper, as we are sure many other people have already cone [Sic],  congratulate him for making such a fine addition to the business district.

...Read more about this and other Bunker Hill, IL historical stories at https://bunkerhillhistory.org/
--Cite this story: The Bunker Hill IL Historical Society. "A Look Back in Bunker Hill History." Bunker Hill Gazette-News, March 3, 2022.
Posted by Carlos Arzuagas (W9FE) at 9:24 AM No comments: