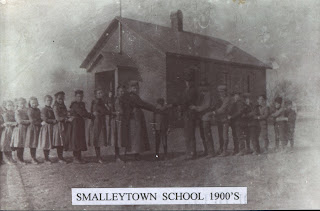 In 1906, Mrs Frances (Smalley) Pennington was the teacher and she had 24 students and her salary was $40 per month. 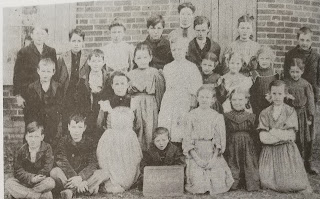 In 1919, Edith Pyle was the teacher and she had five students.  Edith Pyle received $50 per month.

In 1921, Charles F. Keirle was the teacher and he had five students.  Mr. Keirle received $75 per month.

In 1922, Mrs. Gladys Smith was the teacher and she had six students.  She received $75 per month.

In 1944-45, the school had a radio and warm lunch programs heated on an electric plate.  The last annual report was 1947-48 and the last teacher was Mrs. Laura Snedeker.  When the school closed, the students had a choice of where to go.  Three girls chose Woodburn School and the three boys went to Bunker Hill.

Some of the many families who attended Smalleytown Schools were Olmsted, Howald, Pennington, Barnes, Bort, Jacobi, McCurdy, Heal, and Brummer. 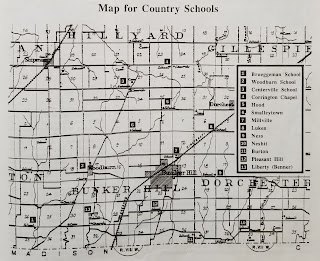 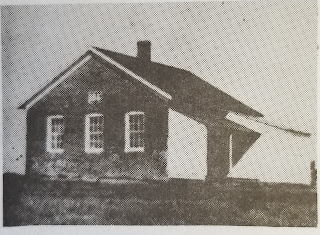 Pleasant Hill School was located in Bunker Hill Township in Section #26.  Today, that is Rust Road.

In 1907-08, Mary Aveiss, teacher, had 25 students and received #35 per month.  The tuition for each student per month was $1.40.  In Mary Aveiss' teachers report, she stated that the blackboards needed repairing badly.  Chicken pox and bad roads had a lot to do with the poor attendance.  The schoolhouse is very much in need of repair.  I, with the help of a 12-year old boy, built a little porch to keep the mud at least a short distance from the door.

In 1924-25, Miss Claribel Seim was the teacher.  She had 13 students and received $74 per month.  The school director was Anton Bruckert.

Some of the many families that attended Pleasant Hill School throughout the years were Rust, Haneghan, Zarges, Sauerwein, Goebel, Bunte, Enke, Ladenforf, Bixen, Bruckert, Duelm, Goodwin, Foreman, Altevogt, and Moulton. 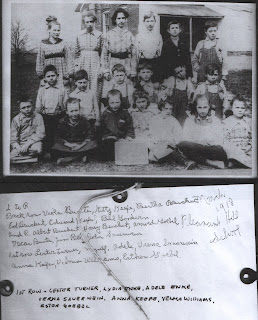