"Carrie was There" - A Caregiver to Many 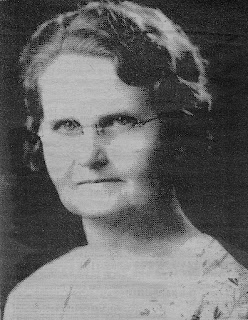 This article was submitted by Carol DuFrain, granddaughter of Carrie Braash

When my grandmother's name is mentioned in this area, someone usually recalls a time when "Carrie was there".  She was involved with many families on the occasion of the birth of a son or daughter and, in this way, was an important part of the history of this area.

She was well known for assisting Dr. Bley and Dr. Hess with home deliveries and the aftercare of the mother and baby.  According to a record kept by her, she cared for over 350 babies over a 23 year period.  The first baby noted was Irma Bartels in 1921 and the last was Joyce Adcock in 1944.  There were some years in the 1930's when she helped with as many as 40 in one year.

She became a widow with three small children in 1917 when my grandfather, Charles, passed away.  She moved to Bunker Hill in 1929.  Her children were Dorothy, Marcella, and Otto.  She had four grandchildren and raised one of them from age three.

She was also known for her beautiful quilts and her work as a member of Zion  Lutheran Church.  She is fondly remembered by many for her kindness and "always being there" to lend a helping hand.

Carrie passed away in 1965 at the age of 80.  A great-granddaughter she never new bears her name.

...Read more about this and other Bunker Hill, IL historical stories at https://bunkerhillhistory.org/
--Cite this story: The Bunker Hill IL Historical Society. "A Look Back in Bunker Hill History." Bunker Hill Gazette-News, May 13, 2021.
Posted by Carlos Arzuagas (W9FE) at 1:58 PM No comments: