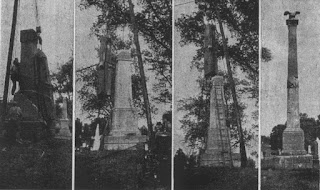 The four top pieces of the Soldiers Monument in the Bunker Hill Cemetery, which have laid half buried in the ground since they were toppled by the tornado in 1948, were put back into place Saturday.  Pictures above show the various stages of taking up the long upper spire, which was said to weigh nearly four tons.  The picture at the far right shows the monument complete with hovering eagle at top.

The work of putting back fallen pieces was done by Floyd Spickerman, James Vaughn, and Malvern Allen.  A gin pole, blocks and tackle, and plenty of rope was employed to hoist up the heavy stones.  Burlap sacks were placed under the ropes to keep them from being cut on the sharp corners of the stones.  The big piece, which caused the men no little concern, was taken up in five hitches, using a tractor for power to pull the two blocks hitched to a sling on the stone.

The monument suffered rather badly in the tornado.  The center section, bearing a coat of arms, was broken on one corner and the lower spire and foundation was also chipped and broken, as perhaps you can detect in the photos.  The eagle lost a large part of its tail and left wing in its unceremonious flight to the ground. 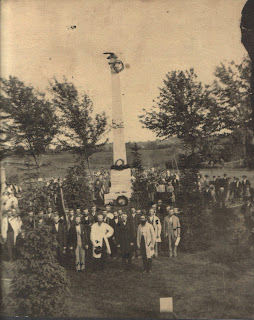 Pictured: The Bunker Hill Soldiers Monument with Civil War Veterans
The Soldiers Monument was erected in 1866 and is dedicated to the memory of the brave men who lost their lives in the Civil War.  For many years, Memorial Day memorial tribute has been paid to veterans of all wars in ceremonies held at the base of the monument.  No doubt, many people will be glad to see that the monument has been restored for Memorial Day services to be held next Wednesday. 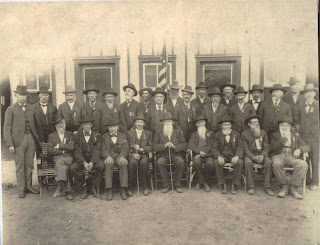 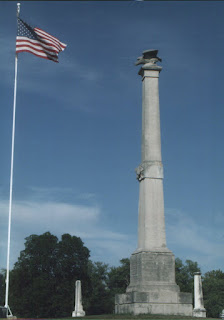