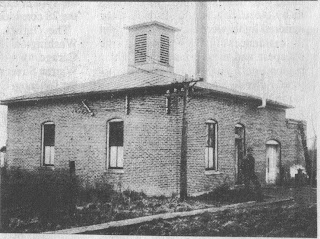 February 6, 1903:  We, the undersigned, merchants of Bunker Hill, do hereby agree that we will close our respective places of business at seven o'clock p.m. each day with the exception of Saturday evening, for the period commencing with Monday, February 9, 1903, and ending with April 30, 1903.  Two medium blasts of the lighting plant whistle will give notice of the closing of the stores.

February 20, 1903:  The early closing problem, so mythically solved by some of our businessmen, has become rudely intricate after a brief existence of one week.  There was apparently no peace in such an arrangement from the beginning, and it was not uncommon each evening to see some of our good merchants standing in the by-ways and alleys, or peering around the corner to ascertain whether or not the other fellow had really closed up.  One evening, an unfaithful brother was spied selling a pair of shoes after the hour for closing, and then the dander was up.  Two or three others threw open their doors and declared they would keep open until midnight.  This led more to lay themselves liable to breach of promise, and the whole thing, it seems, has been thrown up.  We suppose our merchants think it is soon enough to shut up when the sheriff comes around.

By special arrangement the hour of closing of the stores in Bunker Hill has been changed from 7 to 8 o'clock.  The curfew blast of the lighting plant whistle at 8 o'clock will give notice of the closing of stores.  All merchants who signed the former agreement have pledged their word of honor to stand by this agreement, which became effective last evening. 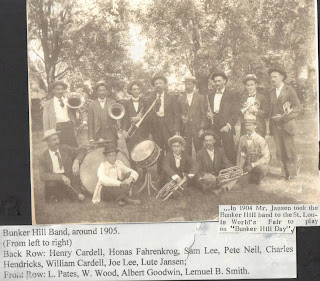 In 1839, the whole community turned out, some 60 people in all, for the town's first 4th of July celebration.  A liberty pole (flag pole) was raised, the Declaration of Independence was read, toasts were made, and much good food eaten.  This celebration took place on the ground in the area now occupied by United Community Bank.  On that same holiday in 1842, over 400 people participated in the celebration and listened to the Upper Alton Band.  On July 4th, 1844, 350 citizens, headed by the Bunker Hill Band, went to Woodburn, and there met the Alton Band. 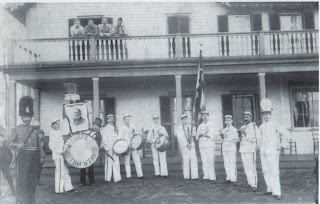 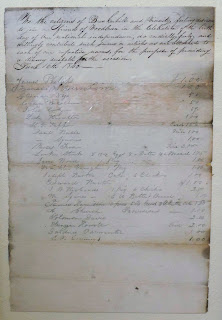 Pictured: Bunker Hill - Woodburn July 4 Celebration Letter dated 1840 found in Dr. Hess's Office during remodeling in 1951.
We, the citizens of Bunker Hill and vicinity, feeling desirous to join our friends of Woodburn in the celebration of the birthday of our national independence, do cordially, freely, and willing, contribute such sums or articles as are attached to each of our respective names, for the purpose of providing a dinner suitable for the occasion:
The original document is on display at the museum.  Workers found the document in the wall at Dr. Hess's office in 1951 while they were remodeling.
...Read this and other Bunker Hill, IL historical stories at https://bunkerhillhistory.org/
--Cite this story: The Bunker Hill IL Historical Society. "A Look Back in Bunker Hill History." Bunker Hill Gazette-News, July 9, 2020.
Posted by Carlos Arzuagas (W9FE) at 8:25 AM No comments: