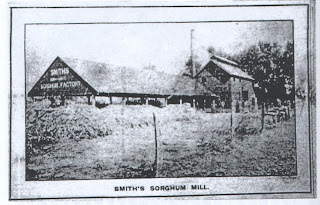 From the Gazette-News: January 2, 1903
The News is pleased to present to the public this week a photo engraving of Smith's Sorghum Mill, which is located one mile north of Bunker Hill and is one of the good institutions of this city.  The Smith Brothers, (Haney V. and Edward) are energetic and popular and have succeeded in drawing a large trade in their line to Bunker Hill.  Not being content with their large output of sorghum each year, they have established a canning factory in connection and each season ship thousands of cans of tomatoes.

For evaporating the juice he would take two pine planks, six or eight feet long and twelve inches deep, to which he would nail on a sheet iron bottom turned up at the ends.  This would be set on two brick walls with a stove pipe at the back end for a chimney.  In this pan would be poured the raw juice from the mill, the fire started, and the result generally would be a black , scorched, sweet-bitter conglomeration called sorghum.

But soon improved methods of manufacture came into use.  the wooden mill was supplanted by the iron mill; the simple pan gave way to a succession of pans, one above the other, the juice running from the mill into the first pan and after skimming and boiling, on down to two or three into the finishing pan.  Also clarifying agencies, such as eggs and soda were used.  Then came the steam mill with the two story building, the juice being pumped up into the upper story, where it is defecated and purified by the clay process and settled before passing down to the finishing evaporators, thereby eliminating that raw vegetable taste so common in unpurified syrup.  By this process of manufacture, the sorghum cane will produce a grade of syrup equal to the New Orleans or Sugar House, and in some respects superior, because it is more dense and contains all the sugar, while the Sugar House is but the residue after the sugar has been extracted.

From the Gazette-News: October 20, 1905
Smith Brothers have filled about 50,000 cans of tomatoes this season and are through with their work for the year.  The brothers have decided to quit the cannery business.  They have made money but the work does not appeal to them.  It is likely that some citizen will lease the cannery from them and operate it under the Smith Brothers labels for their goods have a great reputation in the neighboring cities.