Remote Tombstone Connected with the History of Goodnight Trail in Texas 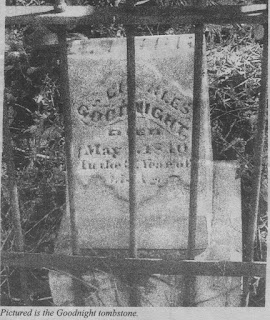 When Willis Wolff, Sr. bought his farm southeast of Bunker Hill in 1938, he was aware of a small one grave cemetery on the property, but didn't learn the full significance of the grave in Texas history until later.

The grave holds the remains of Charles Goodnight, Sr., the father of a man, who went on to become one of the richest cattlemen of the Old West, making his mark as a strong minded, demanding but fair dealing man, who was part of this historic Goodnight-Loving Trail.

Charles Goodnight, Sr., and his wife, Charlotte, moved from Kentucky to Madison County, Illinois in 1828 and crossed over into Macoupin County, where he bought a farm.

The weather worn monument of Charles Goodnight Sr. is enclosed in an iron fence, which is in surprisingly good condition in spite of a tall pine tree, and the effect of cattle in the grazing area of the Wolff farm.

Charlotte Goodnight and her second husband divorced not long after that and Charlie and his older brother, Elijah, went to work for a local merchant for $4 a month.

Charlie was initiated into cattle ranching after his mother married Adam Sheek in 1853.  In addition to his expertise in cattle, he became a tracker of hostile Indians.  After serving in the confederate States War, he resumed cattle ranching.

History books state the fact of the Goodnight-Loving Trail, a previously unheard of journey in which Charlie and Oliver Loving and 18 hands attempted to drive 2,000 cattle from Fort Belknap, Texas to Denver, Colorado.  They made it through with enough of the cattle to give them $12,000 in gold to take back to Texas.  Loving was injured by a Comanche Indian attack during the trail ride and died from complications shortly thereafter.

The story of Charlie's survival is interlaced with his accomplishments: he is credited with inventing the side saddle, creating the chuck wagon, developing a bed tarp, and adapting stirrups and ropes and other gear.

In later years, he and his wife, Mary Ann, opened Goodnight College, one of the pioneer educational institutions of west Texas, and they also built two churches.  Mary Ann died in 1926, and a year later, on his 91st birthday, Charlie married Corrine Goodnight, a distant cousin, with whom he lived for three years before dying December 12, 1929.  Charlie is buried next to his first wife, Mary Ann, in the Goodnight Cemetery near Amarillo, Texas.

Little would Charlie Goodnight Sr. have dreamed that his own son would become a a "cattleman, pioneer, cowboy, trailblazer, Indian fighter, and Texan", a man with no children, but one who left a heritage of undeniable importance to historians across the nation.

Several books, songs, poetry, and the mini-series have been written about Charlie Goodnight:
In 1935, Laura Vernon Hammer published a novelized biography of Charlie, "The No-Gun Man of Texas".
The western novelist Matt Braun's novel "Texas Empire" is based on the life of Goodnight.
The song "The Goodnight-Loving Trail" by Utah Philips.
The songwriter Andy Wilkinson wrote "Charlie Goodnight, His Life in Poetry and Song".
Mari Sandoz's "Old Jules County"
In James A. Michener's book "Centennial, the Skimmerhorn Trail" is based on the actual Goodnight-Loving Trail.
Ralph Compton's novel, "The Goodnight Trail".

--Cite this story: The Bunker Hill IL Historical Society. "A Look Back in Bunker Hill History." Bunker Hill Gazette-News, October 1, 2015.
Posted by Carlos Arzuagas (W9FE) at 9:12 AM No comments: