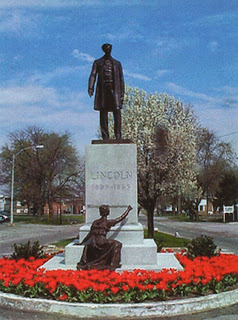 Read our previous blog posting of the Lincoln Monument at: https://bunkerhillhistory.blogspot.com/2015/01/lincolns-statue.html

W.W. Hayes, who has interested himself in the gift of Charles Clinton, of Cincinnati, of a Lincoln Monument to the City of Bunker Hill, will present the matter before the next meeting of the city council, and ask them to accept the same, and also allow the erection of the statue in the center of Washington and Fayette Streets.  This place has been suggested for several meetings.

Pictured: Capt. Charles Clinton
The site is splendid, and will be readily seen by those who come to Bunker Hill from off the trains.  This will allow the statue to be faced south, giving a front exposure from the business part of town.

About the base of the monument, there will be a concrete surface, laid in a circle, the whole to be guarded by an iron railing. 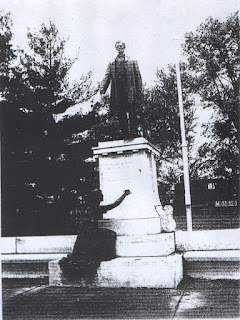 Pictured: Counterpart to Bunker Hill's Lincoln Statue, located in Cincinnati, Ohio
The monument is in bronze and is a counterpart of the one in Cincinnati.  It will stand about 10 feet high.  Besides the figure of Lincoln, there is kneeling before him a mythical  figure of a woman, who has written "With Malice Towards None."

The gift of Mr. Clinton's is most generous and is inspired by the fact that during the Civil War, he enlisted a company of Calvary from this part of the state.

It is hoped the monument will be ready for unveiling May 30, but Mr. Hayes, who is a marble and granite worker, thinks it is impossible to rush the job to completion by that time.  Nevertheless, the day of unveiling will be made one of considerable ceremony, and it will to much to the patriotism of all and revere the memory of our own Lincoln.

The Lincoln Monument has been formally accepted by the City of Bunker Hill and for ages to come, the magnificent gift of Capt. Clinton will stand as a testimonial to the greatest man America ever produced - a martyr to his country.

Miss Mary True, who with her mother, are intimate acquaintances and friends of Capt. Clinton, pulled a cord, which hung on the platform and withdrew a large American flag from the bronze statue of Lincoln, revealing for the first time to the great assembly, a full view of the entire structure-pedestal and statue.  At the same moment, those on the platform arose with Prof. Stiver, the band struck up an appropriate national air, and the entire throng broke forth in a shout of applause. 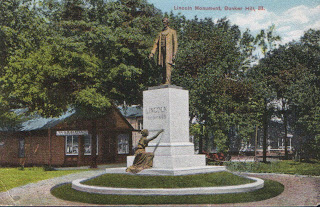 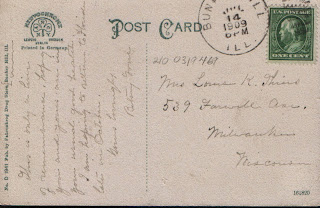 Pictured: Copy of a postcard written by Betsy True (Moses True was Bunker Hill Founder) to a person in Milwaukee, Wisconsin. on April 14, 1909.  The card was printed in Germany published by Fahrenkrog Drug Store in Bunker Hill.  The store sign in the left corner says "Mrs. A.H. Bastian, Millinery and Notions". 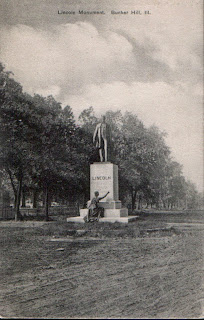 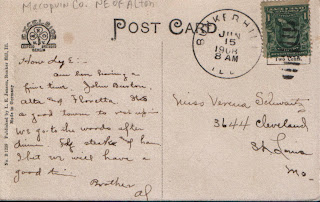 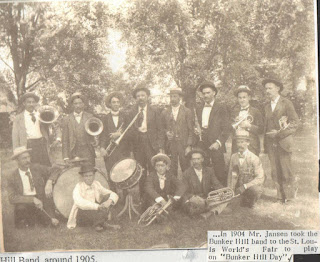 Pictured: The Bunker Hill Band (circa 1905)
Back row (l-r): Henry Cardell, Honas Fahrenkrog, Sam Lee, Pete Neil, Charles Hendricks, William Cardell, Joe Lee, Lute Jansen
Front row (l-r): L. Pates, W. Wood, Albert Goodwin, Lemuel B. Smith
The members of the band were wearing "linen dusters" as a result of having lost their uniforms in the fire of 1893, when the uniforms and instruments burned.  Their instruments are new, as are their top hats.

From the Gazette News: L.E. Jansen, a pioneer news dealer, was an expert at the waltz and polka.  In 1884, he organized a Bunker Hill town band.  The band, under his leadership, rendered many Saturday evening concerts from the bandstands located at the intersection of Washington and Warren Streets.  On June 3, 1886, the name "Jansen's Cornet Band" was adopted.

In 1904, the Bunker Hill band, with Jansen as director, went to the St. Louis World's Fair to play on "Bunker Hill Day".  There were 16 members at that time.

...Read more about this and other Bunker Hill, IL historical stories at https://bunkerhillhistory.org/
--Cite this story: The Bunker Hill IL Historical Society. "A Look Back in Bunker Hill History." Bunker Hill Gazette-News, June 8, 2017.