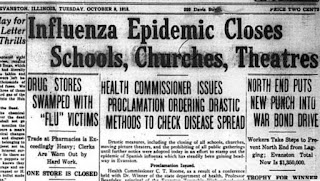 County Superintendent George W. Solomon says on account of the influenza, he was compelled to call off the County Teacher's Institute.  "Owing to so many cases of the Spanish Influenza and also wishing to help stop the dreaded disease, I  have decided to call off the Teachers' Institute, Spelling Bee Contest, and the School Officers' Meeting until future date."


Woodburn: The school closed here Monday for indefinite time, according to State Law, on account of influenza.

Mrs. Bessie Raymond received worked from her son, Olan, that he is very sick at Camp Sherman, Ohio with influenza.

Route 17: Mr. and Mrs. James H. Smith received word of the death of their son, Charles, at Camp Taylor, Kentucky.

Dorchester:  Our schools were closed Friday for an indefinite period.

Edgar Wohlers, Henry Suhling, Jr., and Frank Eggers, have been ill with Spanish Influenza at Camp Taylor, Kentucky.  they are reported as getting well.

Sterling (west of Woodburn): Our school is closed on account of influenza 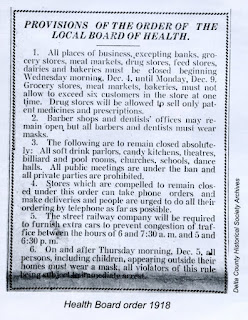 Delta County Historical Society Archives photo Above, the Health Board order from 1918 is shown. The order limited business activity and required all residents, including children, to wear masks when outside their homes.

Mrs. Henry Miller, of Woodburn, came home from Camp Taylor, Kentucky after a visit since August.  She says trainloads leave every day for the front, 4,000 leaving Tuesday and Wednesday for New York and New Jersey.  She says truckloads would pass by loaded with caskets, often 100 dying a night.  Two barracks are quarantined for Spanish Meningitis, including Mr. Miller's, else he would have gone with the rest this week.

Certainly, if ever, there was a life of sacrifice and duty, Miss Maria Louise Nivin exemplified it, dying in the Red Cross service on a hospital train at Cumberland, MD, after having been on it but a week from influenza.

Route 17: The schools at Smalleytown has been closed on account of influenza.

The flu has increased to such an extent, the Board of Health has deemed it wise to forbid gatherings of any nature until further notice.  Some call it the La Grippe and it does not appear to be more that catarrhal fever. At least, results have not been fatal as compared to Benld and other paces nearby, but it is bad enough and there may be a couple hundred cases in Bunker Hill.

Woodburn: Miss Hattie Partridge opened her school on the 18, being closed on account of the "flu".  Meantime she was very sick with it herself.

Miss Edith Elliot opened her school on the 25th, she also having been sick with the flu.

Ridgley: Henry Kastien's and Wm. Wieseman's have been sick with influenza, but are able to be around again.

Dorchester: Mr. and Mrs. C. A. Maxeiner, who have been sick the past week, are both able to be up.

Our schools and churches have not opened up yet on account of the flue.

Henry Suhling is able to come to town again after a siege of sickness.  And Mrs. Windsor, who have been sick with the flue are better.  Mr. Windsor spent part of last week at the station but is not strong enough yet to take up the work.  Dave Thompson has been doing what work he could do, the trains being reported from Bunker Hill and Gillespie.  The Big Four did not send an agent, presumable because of shortage of help..

Mrs. Lewis Fuess and daughter Josie, who have been sick with the flue, are well again. 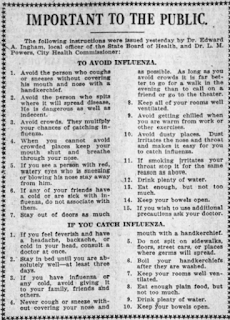 The flue epidemic (in Illinois) has reached a total of 22,566 and this is estimated to be about 3 percent of number of cases.

Everybody should gather in the churches in a spirit of thankfulness, now that the ban is lifted.

The public school will open as soon as Prof. Heyer is able to resume work.

Dorchester: Our public schools expect to open up after the holidays, providing there are no cases of influenza.

District 51: Burton School opened Monday December 16, having been closed for some time on account of the influenza ban.

Route 17: W. F. Lancaster is able to be out after a long siege of flu.

Dorsey: John E. Johnson, the mail carrier and his family have been ill with the flue.  Wm. Bertels has been on the route for the past few days

School Notes: Most of the pupils that have been absent on account of the flu are back at school now.

On Thursday morning of last week, during the opening exercise, Miss Edith Pyle entertained the High School with a vocal solo entitled, "Please Touch My Daddy's Star Again and Change it Back to Blue".  The solo was rendered well and was greatly enjoyed by all.

Dorchester: Our school opened up Monday, January 6 after being closed several weeks on account of the flu.  The Bayless town school opened last week.  The churches are holding services again having been closed also.