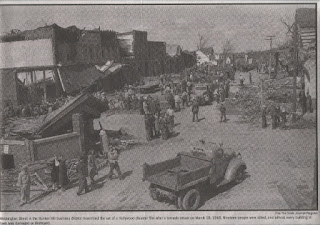 Pictured: Washington Street in the Bunker Hill Business District resembled the set of a Hollywood disaster film after a tornado struck on March 19, 1948.  Nineteen people were killed and almost every building in town was damaged or destroyed. (File/The State Journal Register)

In a cold and dismal rain that began falling yesterday, efforts continued in the little town of Bunker Hill to open streets and clear debris from around dwellings that could be used as shelters.  This is the second time in "10 days less than 10 years" that a tornado struck the town which is the center of a dairy and farming community.  The town was established about 1835 and until the tornado of 10 years ago, a storm of such proportions had never swept the locality. 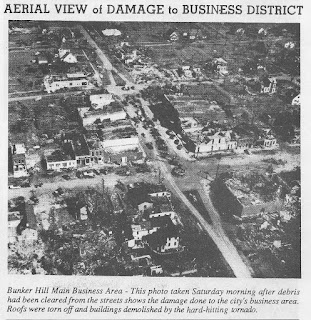 Pictured: Bunker Hill Main Business Area - This photo taken Saturday morning after debris had been cleared from the streets shows the damage done to the city's business areas.  Roofs were torn off and buildings demolished by the hard-hitting tornado.

Sightseers have been barred since the militia took over mid-afternoon Saturday.  Route 112 (now 159), two miles north of the city limits at the spur connecting with Route 138, was patrolled by State Police, who were helped in their efforts to let only those with legitimate business enter the town by long time residents of the community.  Stories were listened to and only those with a compelling reason were given the nod to drive on.  All other roads are barricaded and patrolled against unnecessary traffic. 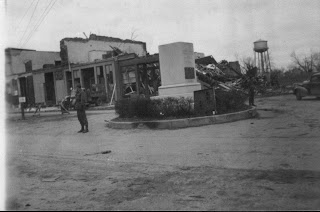 Headquarters for John Ritter, assistant chief, State Police, have set up in a trailer in the parking space on Route 112 in the mid-section of the business district.  It stands only a few feet from the base of the statue of Abraham Lincoln.  The statue itself, almost life size, is lying headless against the north side of the base, when it toppled backward early Friday morning.  On the south side kneels the figure of a woman with hand posed, as in writing, but without the pencil, that was formerly hers, who is ready to complete the sentence, "With malice toward none." 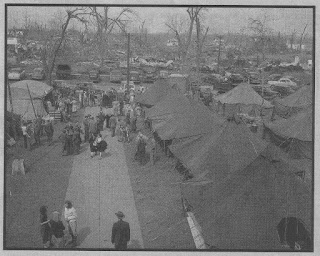 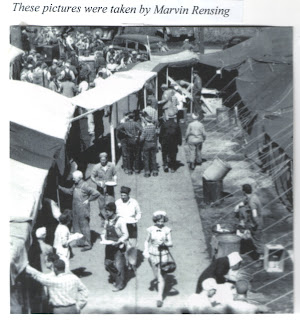 A few feet to the north of the statue, is the tent, where help is administered by the Salvation Army.  Military personnel and citizens alike were loud in their praise of "The Army".  The Red Cross headquarters is established in the Meissner High School building, where the roof, badly damaged, admitted the pouring rain.  A first aid station functioned there after the tornado and remains to continue further efforts if needed.  Various desks and offices to house records and equipment for the management of the huge task, occupy hall space and parts of other rooms, wherever a small space can be found.  A registered nurse, Miss Phyllis Baker, and a high school music teacher, Mr. Pal Byron Hale, a medical corpsman in World War II, aided Dr. C.W. Draper and Dr. Lusk of Carlinville, in setting up an aid station at Meissner High School, where 74 patients were registered.  Doctors estimated that 150 had been treated at the school, a home, a business district store, and the three aid centers.  Six dead lay in one room of the school awaiting the coroner.  Arrival of the coroner and additional State Police was a welcome relief for Mrs. Ethel Herndon, who stood guard at the door of the improvised morgue. 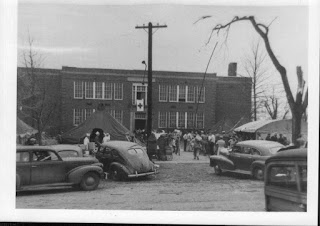 Pictured: Meissner School set up as a Red Cross Headquarters

The once proud town, with its wealth of historical background, is leveled.  Only the school building stands among the major building, and a few of the houses are habitable.  but with agencies of the government and charity converging on the town, it was digging its way out.

...Read more about this and other Bunker Hill, IL historical stories at https://bunkerhillhistory.org/
--Cite this story: The Bunker Hill IL Historical Society. "A Look Back in Bunker Hill History." Bunker Hill Gazette-News, March 18, 2021.
Posted by Carlos Arzuagas (W9FE) at 7:38 AM No comments: