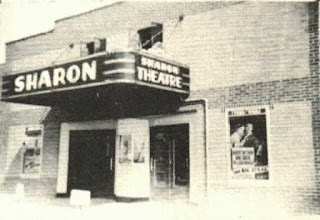 Pictured: The Sharon Theatre was located at 149 South Washington Street, Bunker Hill.  today, common Grounds is at that location. (circa 1950)

Mr. and Mrs. T.A. Baker will be celebrating their 39th year in the theatre business in Bunker Hill, Saturday, September 15.  The date will also be their 40th wedding anniversary.

The Bakers operated the Lincoln Theatre uptown on Warren Street for 11 years.  After the tornado in 1948, the Sharon Theatre was constructed, opening in 1949, where it is now located.  The theatre was named after their daughter, Sharon.

Over the years, the Bakers have employed a number of boys, many of whom they lost to the service and they hear from them from time to time.

In reminiscing, they told of the struggles they have encountered during the depression years starting a new business.  Admission was 25 cents for adults and 10 cents for children, which was hard for people to pay in those days.  They also had 10 cent nights, bank nights, and various stage shows through the years. 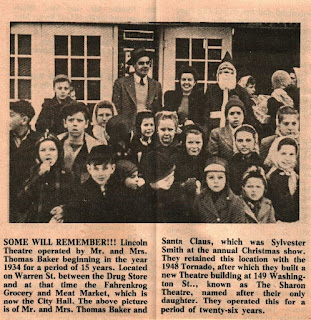 Pictured: Lincoln Theatre with Santa Claus.  Tom and Addie Baker owned the Lincoln Theatre on East Warren St. until they built the new Sharon theatre on the NE corner of South Washington and East Hamilton.

Mrs. Davenport's Circus played there for two weeks with lions, wrestling bears, and trapeze artists.  Many vaudeville acts that were traveling through the country also performed.

The first motion picture show shown by the Baker's was "Magnificent Obsession" which was remade several times.

The American Legion and the schools held plays in the theatre and during the war years, benefit performances were held for the Red Cross, Salvation Army, and Will Rogers Hospital, which is still in operation.

The Bakers are natives of Bunker Hill and they are parents of one daughter, Sharon. 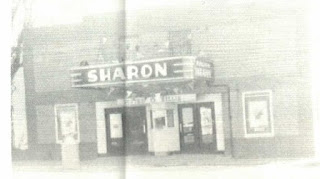 Pictured: Sharon Theatre on the NE corner of South Washington and East Hamilton St in 1976.  Original Owners were Tom and Addie Baker who sold it to Sherman Mason in the early to mid 70's.

--Cite this story: The Bunker Hill IL Historical Society. "A Look Back in Bunker Hill History." Bunker Hill Gazette-News, June 11, 2020.
Posted by Carlos Arzuagas (W9FE) at 9:55 AM No comments: 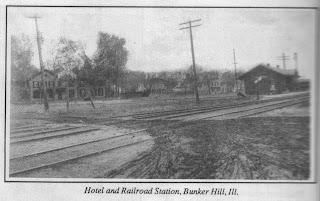 Starting Monday, things aren't going to be the same at Litchfield, Bunker Hill, Bethalto, and other communities located along the route of the New York Central Railroad's "Old Line", which extends from East Alton to Hillsboro. 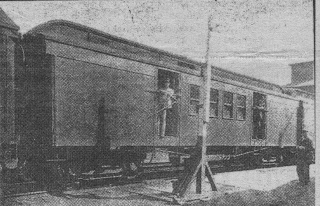 Pictured: Lee (front) and Arthur (rear) Sutton doing the Mail Run in Bunker Hill.  Read more about Lee and Arthur on our blog at https://bunkerhillhistory.blogspot.com/2014/10/lee-and-arthur-sutton-railroad-mail.html
Saturday, the old steam job, known as No. 1314, turned in its last days work.  In addition to drawing along its usual compliments of freight cars, No. 1314 also pulled a neat and compact diesel engine, which will pull the freight train back to East Alton Monday.

In the words of Glen Wells of Hillsboro, engineer of the local freight, which plies between East Alton and Hillsboro, "Old 1314, is no more."  "The engine," he said, "was slated to be hauled back east."  Presumably judging by the dour look on Well's face when he utters the phrase "hauled back east" No. 1314 will be relegated to the scrap heap. 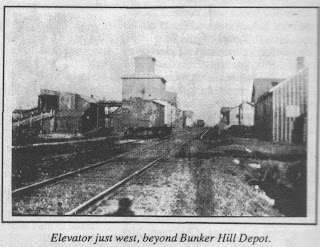 Pictured: Elevator just west, beyond Bunker Hill Depot
Wells has been a railroader for 38  years and says he is inclined to learn a little on the respect one is assumed to have for tradition and precedent.

Joe Gray, of Butler, IL, the engine's fireman, however, is a mere stripling as railroaders go, having but 14 years experience.  To Gray, the whole thing is exactly as it should be. 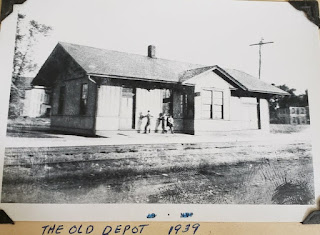 Pictured: The Bunker Hill Depot (circa 1939)

"They'll have atomic-powered engine before they are through, " Gray says.  "That diesel out there will be an antique in 20 years.  They have ball-bearing freight cars already and they can be pushed along by six men.  A hundred miles per hour won't be anything in a few years."

A.S. Reed, of Hillsboro, the conductor, declared that the diesel doesn't even "whistle right".  Reed has been a railroader for 30 years. 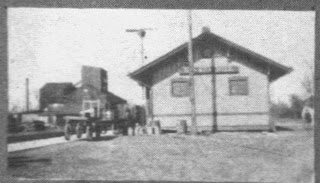 The diesel, however, will be the standard equipment for the local run.  It started this morning when it left Hillsboro for the return trip to East Alton.

--Cite this story: The Bunker Hill IL Historical Society. "A Look Back in Bunker Hill History." Bunker Hill Gazette-News, June 4, 2020.
Posted by Carlos Arzuagas (W9FE) at 7:05 AM No comments: