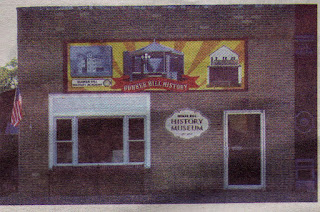 This article was printed in the Alton Telegraph in October 1999

BUNKER HILL --  People can get a glimpse into the history of Bunker Hill at a new museum that opens this month.

The building was renovated after a $20,000 donation was made by a local resident through the American Association of Retired Persons. 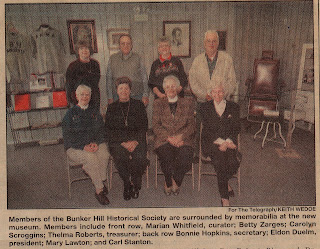 He said anyone can make his own little piece of history by becoming a charter member.  In order to become a charter member of the Historical Society, people may contact one of the members and pay $5.00 by March 30, 2000.

"We're looking for a commitment," said Duelm.  "We're dealing with history and 50 years from now it will be important to say you were a charter member."

Currently the museum is displaying memorabilia of two well-known doctors.  Items of Dr. Robert Bley and Dr. George Hess are being displayed on loan from Mrs. George Hess..

Duelm said the museum is displaying a doctor's bag, exam chair, a cabinet with medical tools and medical license.

Also on display at the museum are a hand made rocking chair form the early 1800's loaned by Lucille Mize and some turn-of-the-century baseball uniforms from the Bunker Hill Military Academy.

The museum will be open at special hours on Veteran's Day, Nov. 11, from 10 a.m. to 2 p.m.  Duelm said that in November the museum would emphasize military memorabilia.  In December, Christmas items will be displayed

Duelm said there are approximately 150 charter members of the Bunker Hill Historical Society.

NOTE: Original board members were:
Today, Betty Zarges and Thelma Roberts are still on the board


Bunker Hill Historical Society and Museum will open for the season, March 7;
Hours for the Museum are:
Saturday, 10:00 A.M. until Noon

Posted by Carlos Arzuagas at 4:41 PM