History of the Bunker Hill Township 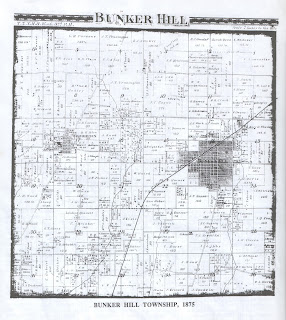 One of the earliest settlers of the township was John Cooper, a native of Tennessee, who built a house on the edge of the prairie, in Section 28.

The year 1827 witnessed the coming of James Breden and his family.  Breden was the first Justice of the Peace in the township and held that office for more than 20 years.  James Breden had two sons, Wiley Breden and John F. Breden, and a daughter, wife of Edward Baucon.

Jonathan L. Wood came in 1830, also Benjamin Davis and his sons, Jefferson, Isaac, Alfred, and David.  Davis made a settlement in the northwest corner of the township.  The Davis family was originally from North Carolina but came to Illinois from Tennessee.

James Wood came in 1831 and settled the farm in Section 30, later owned by his son David Wood.  He was born in Loudon County Virgina.  He had five sons, three of whom (Samuel, David B., and James E. Wood) lived in the township.

A Tennesseean named William McPike settled in Section 30 in 1831.  Mrs. Millie Bayless and her sons, Reese, John, George, and Daniel became residents in 1831.  Reese and John Bayless were prominently connected with the old militia, Reese holding the position of Colonel and John that of Adjutant.  Both were in the Black Hawk War.

In the vicinity of the Corneilson mound, or as it was sometimes called, "Tickey Mound", in Section 29, the early settlers were Daniel Littrel, Alexander Conley, John Murphy, John Corneilson.  Charles Collyer was also an an early resident of the township as were Finley Jones and Moses Jones.  John T. Wood came in 1831.

In the neighborhood of the Springfield Road (Route 159 and the area of Catholic Springs Road), settlements were made by William Wood, Isaac Wood, Alfred Wood, James Wood, Ephraim Wood,  Anthony Linder, George Howland, Elijah Lincoln, Samuel Buell, Charles Goodnight, and Dr. Budden, who was the first physician to reside in the township. 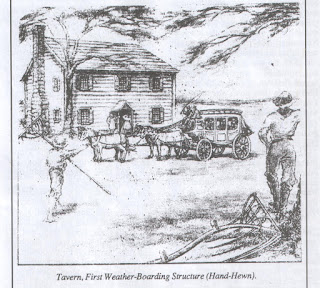 In 1830, the first settler in this immediate vicinity, Elijah Lincoln, occupied the prairie about a mile and a half southwest of the present site of Bunker hill.  Soon afterwards, he, in company with a Mr. Tuttle, laid out the town of Lincoln, naming it in honor of Elijah Lincoln.  That land was later occupied by J.V. Hopper, Johnathan Squires, and in 1904 by Mr. S.R. Winchester.

Early in 1836 Dr. Budden built an ox mill near the settlement.  In June of the same year the sawmill was dismantled of its power, i.e, the ox, in default of money loaned by Messrs. True and Tilden.  After the dismantling of the sawmill, Mr. Colby placed his house on eight wheels and with two teams of oxen, moved his house (leaving only one house in Lincoln) to a new location near the Woodburn Mill.  Woodburn was considerably elated at this addition as half a town came rolling in.  This was afterward the home of J. Tompkins.  No traces of the town of Lincoln now remain. 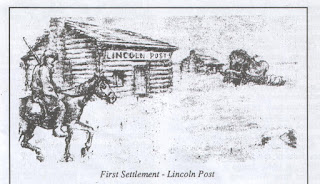 In 1833, the town of Lincoln was laid out about two miles south of Bunker Hill.  A post office was established in 1833 and called "Lincoln" and Anthony Linder was appointed Postmaster.  He was succeeded by Mr. Cook.  Samuel Buell took charge of the office in 1837, and in November of the same year, the Post Office was transferred to Bunker Hill.  Josiah Richard acted as assistant Postmaster.  Nathaniel Phillips was the Postmaster appointed after the removal of the office to Bunker Hill.  There was a Post Office in Woodburn starting in 1837.

On the east side of the Wood River Creek in Section 33, the first mill in the township, propelled by ox power, was put in operation by Moses Jones.  Dr. Budden erected another mill soon afterward about a mile southwest of Bunker Hill.

The first schoolhouse stood on Section 21 and was afterward moved to Section 22.  Mr. Richardson was the first teacher and was succeeded by Josiah B. Harris.  About 1831, a schoolhouse was built in Section 20 on land belonging to John T. Wood.  John Wilson, Jesse Wood, and Asron Leyerly were also early school teachers.

In the schoolhouse in Section 21, the first sermon was preached by Elder William Jones.  He was a member of the Baptist denomination with which a great part of the early settlers were connected.  Elder Alexander Conley was the first minister to reside in the township.  Rev. Gimlin was another of the pioneer "Hard Shell" Baptist preachers. 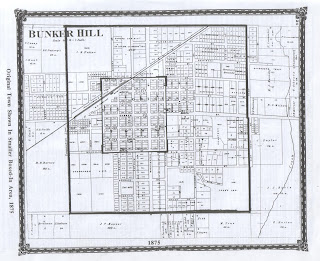 In 1834, Like Knowlton, then county surveyor, entered 80 acres of land covering the central position of Bunker Hill.  He also built a cabin on the height of "Wolf Ridge" (the spot where Dr. Belcher's office now stands next to the United Community Bank) hoping thereby to keep others from entering the north quarter section until he could get more money to enter additional land.

In this hope, however, he was disappointed, for in 1835, Mr. Wilbur came out from Boston and entered land north, east, and west of Knowlten's tract.  He also purchased the 80 acres which Knowlton had entered and built a house on what was later the Ruben Barnes farm in Section 22.

The season of 1835 was marked by thte great prevalence of malarial disease and continued sickness, and for this reason Wilbur sold his tract to Robert Smith of Alton.  J.R. Nutter entered land, and in 1834 built a house north of the Woodburn road and west of the city limits; he also disposed of his tract to Mr. Smith.

--Cite this story: The Bunker Hill IL Historical Society. "A Look Back in Bunker Hill History." Bunker Hill Gazette-News, February 6, 2020
Posted by Carlos Arzuagas at 10:33 AM