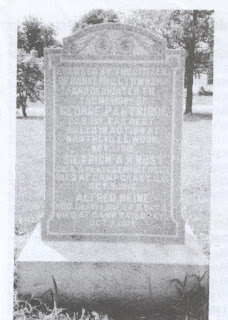 From the handwritten Historical Archive Manuscript of "History of the American Legion Auxiliary Partridge Post No. 578 of Bunker Hill Illinois, Macoupin Co." kept at the Bunker Hill Historical Museum.*  This is a story written by a World War I mother who made the trip to France to visit her son's grave.

Mrs. Isabella "Belle" Partridge traveled to France as a part of a Gold Star Mothers pilgrimage.  A United States government program paid the travel expenses to grave sites for mothers and widows. whose sons and husbands had died overseas as members of American Expeditionary forces during World War I.

I had a very interesting trip all the way through.  I left Bunker Hill on the 7th of July 1930 and returned August 15, 1930.   Everything was planned by the government so there was no worry on the part of the Gold Star Mothers, every change of train, bus, or ship.

We arrived in New York Tuesday evening and were taken to the Roosevelt Hotel for the night having dinner and breakfast there.  Then buses called to take us to the "President Harding" leaving for France on Wednesday.

The voyage was pleasant, no storms or bad waves while we crossed.  I was not sick at all so enjoyed my trip very much, eating each meal in turn.

We arrived in France eight days later.  We stopped to deliver mail and some tourist passengers at Plymouth, England, then continued to Cherbourg, France.  We left the ship on a smaller boat named "Welcome", then took a train for Paris.

I believe there was an American at the engine for we surely did some fast traveling on a rough train for six hours.  After reaching Paris, buses met us and we were taken to different hotels.  Mine was the Commodore.

The next morning, all were taken to the Unknown Soldiers grave which the first thing each group does, place a wreath, and hear a welcome address!

The French Counsel could not talk English which he said he never felt so bad about as when he delivered the welcome address.  He was a substitute for the French President.

After returning to our hotels, we didn't see the whole group again until we returned to the ship "Roosevelt" to come back to the United States of America.
Each group visited the cemetery where her son was buried.  We, about 80 or more, were taken to the Meuse-Argonne Cemetery where each mother was given a wreath to lay on her son's grave.

The grounds contained 25 acres and have nearly 24,000 graves in it.  Nice Hostess houses and beautiful flowers with drives, paths, and workers, so the graves are easily found.

It is about 175 miles from Paris. We made the trip in a bus on Saturday to hotel Verban, going each day to the cemetery of about 25 miles taking different roads and seeing the battlefields of the latter part of the World War.  Many of the building still show scars, although they are being repaired.

Sunday, we spent the day at the cemetery and also took our lunch from the hotel with us, having coffee or tea served at the rest room.  At roll call, each mother was given a card with name and section where the grave of her son was with guides to show the way.

The grounds are kept beautifully, with nice mown grass and workers all the time.  The workers and overseers of the grounds were Americans.  They grow the most beautiful flowers here of every variety.
We visited the cemetery four different days and then returned to Paris.  The roads are kept in good condition but narrower than ours.

It was just harvest time and people were gathering in the grain, both men and women working in the fields.  What seemed odd, we did not see any young people in the teenage. Only small children and old people.  I suppose the others were in school or in military training.

The mothers or women in general all wore black with long crepe veils and the children did not seem to be playing happily, just sat and looked at us passing.  Often waved in return as we waved as we passed through.  The people live in villages and go out to their farm work.

The horses were in good condition and driven one in front of the other which was hitched to a wagon.

Women with dogs did the herding of the cattle along the roads or fields.  Many small buildings were roofed with old iron sheeting, probably picked up from the war waste heaps.  There is no rubbish along the sides of the roads but every small limb from the trees were gathered in bundles and taken to the town for fuel.

I didn't see a calendar while there except the one in my purse so it was hard to keep track of days of week or month.  We left Paris on the 29th of July and arrived  in New York on August 6.  All bring tokens to the Astor Hotel until everything was settled and were were given tickets home.

I visited in Brooklyn with Miss Bertha Muhleman and her cousins.  We took a boat ride up the Hudson and visited the stores and parks of Brooklyn, also Coney Island.

I was glad to get to the U.S.A and home.

*Mrs. Annie Budd was the American Legion Auxiliary Post 578 Club Historian, elected October 8, 1929 from whom recorded this story into their History Ledgers.  She appears in the photo of Officers below. 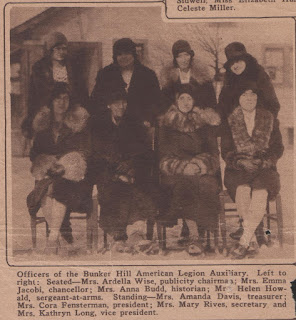 Posted by Carlos Arzuagas at 8:08 PM