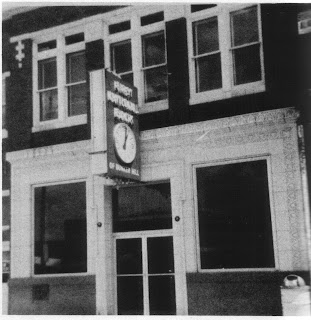 In 1877, the City of Bunker Hill was without banking facilities, as a former private bank had failed.  The businessmen of Bunker Hill were used to the checking and depositing plan of handling and protecting their cash.

One of these businessmen was Frederick Buman, operator of a grain elevator.  Prices were good and considerable amounts of cash were on hand.  Not wishing to keep a large amount of cash around the elevator, Mr. Buman established his son, Adolph Buman, in the dry goods and shoe business, bought a large safe, and left his cash money with his son at the store.  Mr. Buman would then issue to his customers an order showing how much grain had been sold by them and they would take this order to Adolph Bumans' Store and get the cash.  From this modes beginning the present bank started.

In 1878, Frank E. Huggins joined with Adolph and formed a partnership.  Because Mr. Huggins was not of age, the firm was known as A. Buman and Company.  Not long after this, the firm of Wise, Mercer and Company, were were operating a flour and feed mill, decided it would be to their advantage to likewise protect their cash.  So they also deposited money with Buman and started issuing orders for the payment of money.

In 1881, Mr. Huggins became of age and the firm assumed the name of Buman and Huggins.  Records show that deposits amounted to $2,951.73.  In 1881, another group opened a bank in Bunker Hill, but the First National Bank had established itself and deposits continued to climb.  Mr. Huggins sold his interest back to Adolph Buman.

When the deposit plan above was first adopted, the owners saw the need for some bank with which to do business and chose the Boatmen's Savings Institution as a correspondent.  It is significant to note that an account has been kept continuously with Boatmen's through all the years since 1877 up to the present.  This included many changes in both the Bunker Hill Bank and Boatmen's of St. Louis.

Until 1892, Mr. Buman conducted both the dry goods and shoe business and the banking business by himself.  Finding the task too confining, he took Charles E. Drew in as a partner and the business became Buman and Drew.

It was continued along the same lines with a gradual growth of deposits and in the same place as the present bank until 1898 when a fire completely destroyed the building.  The business was moved to the site later occupied by Jacobi Hardware. 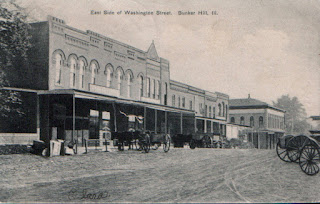 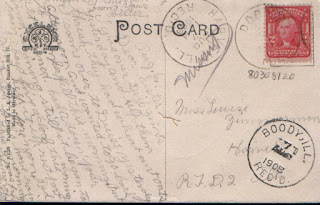 In 1899, Buman and Drew purchased the present site of the bank and in conjunction the Mr. S. N. Sanford, built the bank building at the site later occupied by William's Red and White Store.  This was completed in 1900.  A new vault, modern for its time was included in the construction.

A steady increase in deposits brought them up to the $200,000 mark in 1913 at which time an agitation was started for a State or National Bank.  After due consideration, a National Bank was organized and opened for business on May 5, 1914.  This new bank brought the assets of Buman and Drew and also assumed the liabilities.  Adolph Buman was its first president and Charles E. Drew, the first Cashier.  At this point the bank continued to operate in in its usual quarters while the dry goods and shoe business was moved across the street and operated for a few years.  Then it was sold to E. R. Welch. 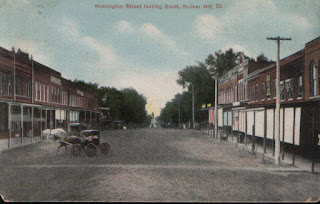 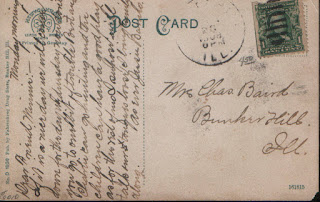 In 1924, the demand for safe deposit boxes and other conveniences necessitated the building of a more secure and spacious vault.  Operations were started that Fall and completed in 1925.  It was during this period of construction of the new vault that the bank was robbed of $3,700 and several employees beaten by the holdup men.  Following the holdup, the bank installed safety bulletproof glass for the protection of its business and employees.  It was the first bank in in Macoupin County to make such and installation.  The walls and floors of the new vault were 27 inches of solid concrete with two rows of steel reinforcing bars.  With its nine ton doors, burglar alarm and nest of safe deposit boxes, it constituted one of the best and safest vaults in this part of the State.

During 1933, the graveyard of many banks in the Untied States, it was closed during FDR's "bank holiday" and reorganized.  From 1914 to 1933, the stock in the bank was rather closely held by a few individuals.  One of the conditions of reorganization was to increase the number of stockholders.  When the bank reopened November 13, 1933, there were fifty-seven stockholders.  The Officers of the reorganized bank were: Mr. I. E. Sanford, President; Mr. Drew, Vice President; and W. E. Haxel, Cashier. 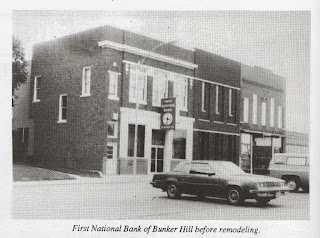 The bank has been remodeled several times since 1925.  In 1927, the building was remodeled and redecorated; in 1952 the old counters and the bulletproof glass were torn out and new counters were installed; and in the mid '70's, a walk-up window was added.  the Drive-up facility on the south end of town was added in 1979.  The main bank building expanded to the south as the buildings formerly housing the Red and White Store and Jacoby-Wise Furniture were acquired.  The most recent remodeling was in 1988 which included a new floor plan, and a totally new "look" to both the inside and the outside.  The plan included taking out the separating walls of the two buildings to the south for office an work space.  The bank remained open for business during this time.  Customers could make a careful entry through a temporary entrance on the north side of the building.  When all was completed, an open-house celebration provided the people a tour of the new facilities. 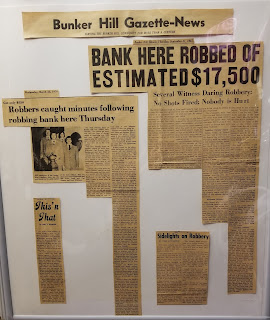 There have been two additional robberies since the one in 1925.  In September of 1967, approximately $22,000 was stolen.  This was not recovered as the statute of limitations had run out before the robbers were found .  Five hundred dollars stolen in 1978 was recovered and returned by  July of 1981. 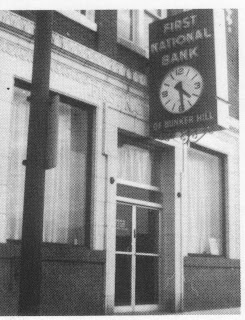 Through the years, while the location, the vault, and the account with Boatmen's have stayed the same, the physical appearance of the building and the organization of the bank have changed.  In March of 1981, the bank became a one-bank holding company with Robert A. Narmont as President, Stephen D. Narmont as Vice-President , and Ralph L. Gerdt as Secretary.  In July 1985, it was again changed, this time to become part of a four bank holding company.  The four banks are Bunker Hill, Gillespie, Greenfield, and Pawnee/Chatam.  the First National Bank of Bunker Hill gave up its National Bank Charter and has been operating under a State Charter since January 1, 1992.  At that time, the name was changed to United Community Bank.  The present Officers (1993), are Robert Narmont, President of the holding company; Allen Moore, Executive Vice-President and Operations Officer; Jeannette Lawrence, Assistant Vice-President; and Elizabeth Wieseman, Cashier.

Posted by Carlos Arzuagas at 8:20 PM