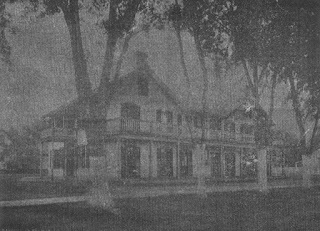 This is a follow up expanded story from my earlier March 10, 2015 blog posting which can be read at https://bunkerhillhistory.blogspot.com/2015/03/the-monument-house-hotel.html

Through the early years of the old Bunker Hill Gazette ran comments and references to the Monument House, Bunker Hill's grand hotel.  How old it was, exactly, we cannot say, but the following article on the Monument House appeared in the Aug. 5, 1896 issue of the Gazette, and we found it interesting.  A small picture appeared with the article, however, it is not fit for reproduction.  Should anyone have a picture of it, preferably during its grand days, bet even in its later years, we would appreciate the use of it.


August 5, 1896 --  One of the greatest events in the history of Bunker Hill, was the opening of the Monument house, which took place in 1856, under management of Mr. William H. Carroll (now long deceased).  This became one of the most famous hostelries between the Alleghenies and the Mississippi.  The Indianapolis & St. Louis Railway (then the St. Louis, Alton and Terre Haute) and the Ohio & Mississippi were then the only lines between St. Louis and the East and the passenger travel over the former was very heavy.  All through trains stopped here for meals and the table service was so excellent that the house was noted far and wide.  (See "The Big Four Station" blog post at: http://bunkerhillhistory.blogspot.com/2014/10/the-big-four-station.html and "Lee and Arthur Sutton - Railroad Clerks" - http://bunkerhillhistory.blogspot.com/2014/10/lee-and-arthur-sutton-railroad-mail.html ).  After the death of Mr. Carroll, the house passed through several hands, and some years ago burned. down.

The name by which the famous old hotel went, has been resurrected in connection with the practically new house on lots adjoining the old one.  The engraving above shows the appearance of the new establishment.  In its renovation and furnishing, the owner, Mr. John R. Richards, has spared expense in no direction, and in the completion of his work he has reared a Monument to his own good taste and liberality, as indeed he has in such a handsome adornment to the city as his own residence, and in such a substantial addition to our business interest as in the Foundry.  That he has been highly successful in his work goes without saying.  The arrangement of the house is most complete for managers and patrons' one more comfortable or more handsomely furnished will not be found in any interior town. 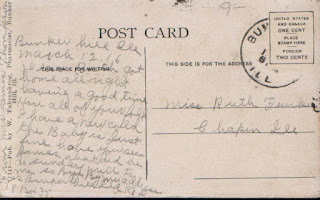 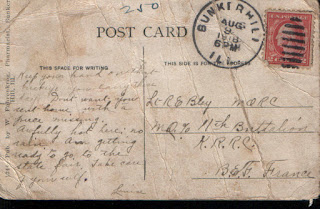 The building is frame, covering 33 by 75 feet, two stories high throughout, with porches and verandas on three sides.  The painting is fresh and tastefully contrasted in colors, and the tall grassed, abundantly shaded grounds, unmarred by fence, make handsome exterior surroundings.  Adjacent on the west and north are well grassed lawns.

The lower floor contains office, parlors, dining room and kitchens, with good dry cellar under all.  The office is abundantly lighted with windows on north and south, and is wainscoated with oak.  The furniture is heavy well polished oak, upholstered in green leather.  There is a capacious safe, and the large clock on the wall is a handsome ornament.

The ladies parlor is carpeted with Brussels of elegant pattern; the furniture includes some rich plush pieces; the wall and ceiling papering is rich and tasty, as it is throughout the house.  Across the hall is another parlor, which may be utilized as sample room or bed room; the furniture is well polished oak.

The dining room is cheerful and well-lighted, and furnished with latest design of furniture in oak, the principal ornament being a very fine sideboard.  The room contains four dining tables which will accommodate twenty-four guests.

The kitchen and pantry are models of convenience, containing a capacious range, reservoirs for hot and cold water, and closets stored with an unusually large and excellent outfit of tableware.  The floors are hard pine, with oak wainscoating.

The upper floor has four bedroom suites of two rooms each (eight single rooms) and a double room all well lighted and ventilated.  They are handsomely papered and carpeted in first class wool ingrains and beautifully furnished with bedstands of iron with bright brass trimming, the other articles being highly polished oak.

All the hallways and stairways are carpeted and papered, and most excellent taste has been shown throughout, in this as well as in the furnishing.  For the present the house will be lighted with coal oil, and heated by stoves.

Mr. Richard has shown a commendable public spirit in dealing with home people in all his large undertakings.  The carpenters and painters; bills have been done by home workmen.  The home merchants are entitled to credit for filling their contracts well.  M. Sessel has furnished the table and the bedroom linen; the crockery and glassware came through S. N. Sanford; C. J. Jacoby put in the carpets, furniture, etc.;  J. F. Cummings provided the mammoth range and cooking utensils, and W. P. Dickie set up the office clock.

The house was put in preparation for rent to a competent manager; there have been several applicants, but no contract has yet been signed, and the property is open at present to some capable man, ready equipped for immediate and satisfactory service.  It will not be let to any one who will not keep a high grade house on a two dollar basis, with the best service that the money will afford.  It was opened in a quiet way last Monday.  Miss Lizzie Kenyon acting as housekeeper; while Mr. Richards, who will take his meals there, will exercise a general supervision and act as a Bureau of Information.  In their hands there will be no want for creature comforts or kindly attention to the resident boarders who have engaged there, or of commercial travelers or other transients who happen along.  It is to be regretted that one who knows as much about good living, and has as many genial points as Mr. Richards, did not drop into the role of Boniface years ago and settle down to it as a life occupation.


Read more about the Monument House Hotel story on my March 10, 2015 blog posting at https://bunkerhillhistory.blogspot.com/2015/03/the-monument-house-hotel.html

Posted by Carlos Arzuagas at 11:33 AM