80% of Bunker Hill was destroyed causing 19 deaths and approximately 165 injured.  Reported damage of 1 1/2 million dollars was left in the tornado's wake at 6:45 a.m. H. F. Lund of Springfield set up a ham radio in the middle of Bunker Hill IL and relayed information to radio stations around the state.  H. F. "Buzz" Lund was FCC licensed as Amateur Radio operator W9KQL. He was a member of the Springfield, IL  Amateur Radio Club and also an active member of the Red Cross.  His son, Thomas "TJ" Lund is also FCC licensed as N9PFC and now lives in Champaign, IL. 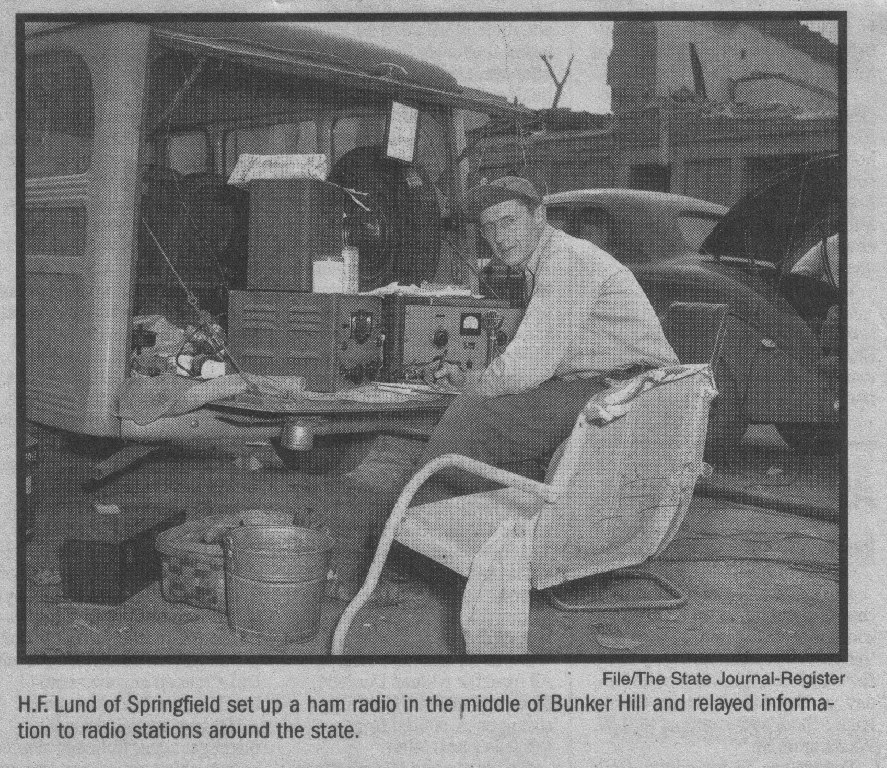 The following is a reprint of the March 25, 1948 Bunker Hill Gazette News article...

Terrific disaster descended on Bunker Hill at 6:45 am Friday morning when a tornado ripped through this 112-year old city, taking a toll of 19 dead and 126 injured, and left a tumbled mass of wreckage in its wake.  The storm rolled over the business and residential area like a giant steamroller smashing brick and frame structures like paper boxes, laying 80 percent of the city waste and caused damages estimated at 1 1/2 million dollars...read entire article reprint at  http://www.bunkerhillhistory.org/Tornado.html

--Provided by the Bunker Hill Historical Societey
Posted by Carlos Arzuagas at 6:30 PM